Author’s Dilemma: Should I Kill This Character? 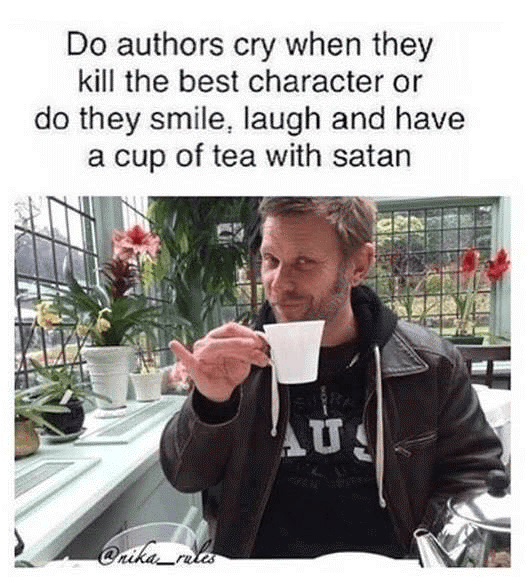 To kill off a character in your novel is a dilemma for some authors. But if it is done correctly, advances the plot of your book, and makes your reader go, “Oh, I didn’t see that coming,” then you know you did it right. Read on to find out if killing a character is the right thing to do.

When I was writing my first novel, Behind The Eyes Of Dorian Gray, back in 2005, I had a sudden epiphany.

I would kill off a character in an awesome way!

It was one of those “aha” moments. I’m fairly sure everyone in Southeastern Ohio saw the small nuclear explosion that was my mind at the time. She wasn’t the first character I killed in a story. But her death made the book’s ending so much better.

WHY SHOULD I KILL OFF MY CHARACTER?

WHY SHOULDN’T I KILL OFF MY CHARACTER?

There are also reasons NOT to kill a character, such as:

Let’s look at that last one. Some casts of characters become too big to handle. In order to manage it, an author will kill off a character. Every character has a reason to be in your book. They serve a purpose. If you cannot transfer that purpose to another character so that your story flows, you need to reevaluate why the character you want to kill off is there.

Instead of killing off the character, consider writing him or her out of the story. You won’t bog your readers down wondering why you killed them off. You will also save them from unnecessary heartache.

HOW DO I KNOW IF I SHOULD?

If you think killing off a character can satisfy the reasons above and not leave a vacant role in your book, see if you can check these off:

Can you check off those items in the list above? If you can, then go for it. Kill off that character. Then sit back and watch the fun begin.

Ever kill off a character? Ever have a character death affect you? Tell us about them in the comments below.