Narrative Writing – What Is It and Why Do I Care? 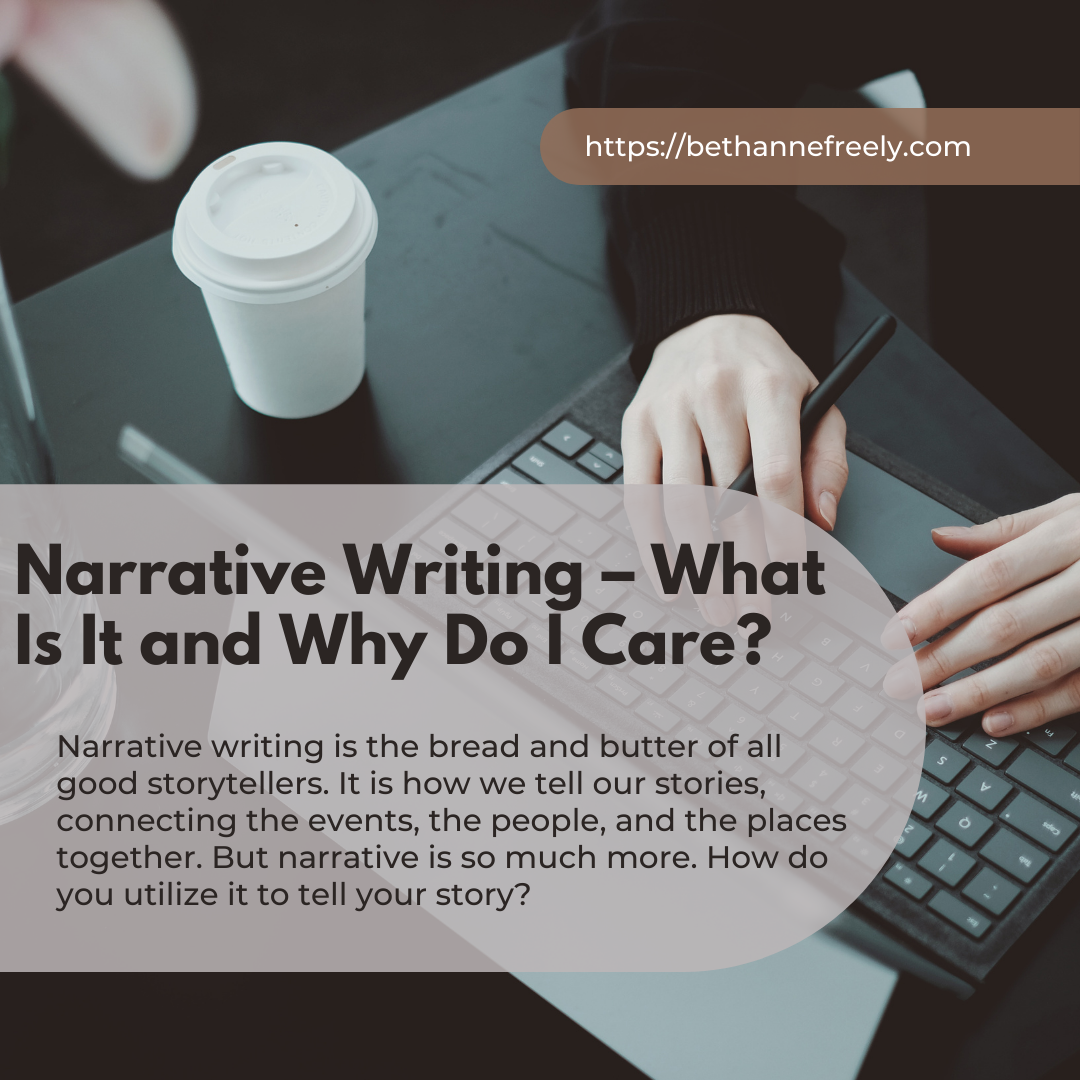 Narrative writing is the bread and butter of all good storytellers. It is how we tell our stories, connecting the events, the people, and the places together. But narrative is so much more. While a “story” can catch the reader’s attention, it leaves it up to the reader to draw their own conclusion when the story ends. However, a “narrative” is the combination of the story and the plot that drive it. It unites all the distinct events in the short story, novel, or essay – fiction and nonfiction alike – and typically contains a beginning, middle, and end.

Consider how boring a story would be without the descriptive details. Narrative helps fill in those details. For example, in my novel Behind the Eyes of Dorian Gray, I use narrative storytelling to describe a personal computer from the point of view of a man from the Victorian era who had never seen one before. Using this type of storytelling helps the reader understand the interactions between a character and an object.

Or even between two characters.

Narrative writing has been around for as long as people have been telling stories. It’s not only found in the written word. We see narrative storytelling in television and film. You’ve probably used this technique in your own writing at one time or another. After all, the narrative essays we all had to write in school probably were the bane of a few people’s existences. Let’s look at the distinct types of narrative writing.

The Narrative Essay or Linear Narrative

Typically written in first-person or third-person omniscient, the narrative essay or linear narrative storytelling style has a clear plot with a beginning, middle, and end to the story, and it contains more description and less analysis of the story. If the story is written in the first-person point of view, it gives the reader a look into the narrator’s life. That could be the story of the person who is writing it if it’s non-fiction. Narrative essays can be easy to write if you have a topic you’re passionate about or an interesting story to tell. These stories are also told in linear – or chronological – order.

This type of narrative opens the door for an unreliable narrator when it comes to a fictional account. What this means is that the narrator is telling the reader information that is subjective and in such a way that it can’t be trusted. An unreliable narrator is either unintentionally misguided or deliberately deceptive. It’s up to the reader to decide. If you use this type of narrative in your writing, make sure you outline your story before you start writing it so that it stays on track.

The non-linear narrative, on the other hand, tells the story out of chronological order. It uses flashbacks and similar literary devices to tell the story, keeping the reader engaged by breaking the timeline while presenting thematic connections, past events that affected the protagonist or antagonist or even showing the reader the mindset of a character. It is a great way to build suspense or to weave a story where multiple decades can be covered without overlapping.

If you are a fan of J.R.R. Tolkien’s The Hobbit, then you are already familiar with the quest narrative. The quest narrative is exactly what it sounds like: it is a story where the protagonist is working towards a goal. It becomes their passion, and they must pass trials and insurmountable obstacles to fulfill their goal. The quest takes the protagonist from the comfort of their home to someplace remote. There is usually some type of crisis along the way and the protagonist may meet others that will help him or her succeed.

The Coming of Age or Bildungsroman Narrative

Finally, the coming of age – or bildungsroman – narrative focuses on the psychological and moral growth of the protagonist, usually from childhood to adulthood. The process is the central theme of the story, and the protagonist must learn something along the way as they mature. The main characters in these stories tend to be young and inexperienced when they start out. Watch out for “coming of age” stories that are set during wartime or where the main character is forced to grow up too quickly. These may not be true coming-of-age tales. A true coming-of-age narrative follows the protagonist well beyond adult events such as marriage.

Why Should I Care About Narrative Writing?

No matter what kind of writing you do – fiction, non-fiction, memoir, biography, etc. – understanding narrative writing will help you communicate effectively to your reader and give them a glimpse of the world through your eyes. It can help you find the purpose of your writing and give you a chance to define your point of view. Not only will the tale you’re telling be interesting, but the reader will also remember it once they are finished.

Narrative writing is a cornerstone storytelling element. If you take the time to explore it in your own writing, you will open a world of possibility.